Blue skies and fresh powder at Baldface Lodge make for the perfect day. 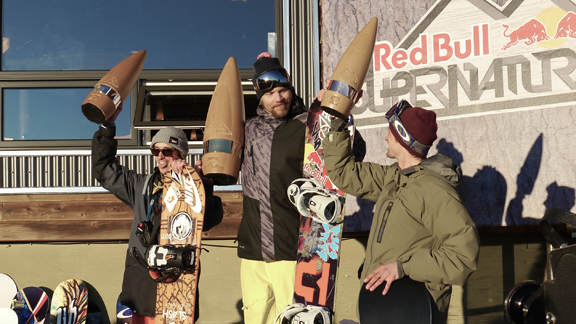 Photo Credit: Melissa Larsen
Many of you watched the Super Bowl yesterday and I can't say I blame you. It was an incredible game with two amazing teams fighting for one of the most prized trophies in all of sports (next to the Stanley Cup of course!). Sports history was made yesterday in Indianapolis but there was another sport that progressed and made a little history of its own. I am talking about the Red Bull Supernatural that took place at Baldface Lodge located in the backcountry of British Columbia. This lodge is normally host to powder hungry skiers and snowboarders who travel from far and wide to taste a little Kootenay pow. But yesterday it was host to some of the greatest snowboarders of today.

"Take X Games and move it to a real mountain,"

- Nicholas Muller
Continue Reading for some video of the action.

The Red Bull Supernatural is the brainchild of Travis Rice. He has taken the sport of snowboarding and mashed together different disciplines in hopes of finding the best riders on the planet. As it turns out, he is at the top of the list winning his own competition! You see, Travis has been cooking up this idea for a number of years and this past summer the wheels were set in motion. He and a team of BC lumberjacks headed out to Baldface and sculpted the 40 degree slope 'Scary Cherry' into the ultimate blend of backcountry riding and freestyle stunts. Then they let nature and La Nina do the rest.

I know, I know, it sounds a little strange that the guy who designed the course won his own event but stories coming out of Baldface state that he was the clear winner with an amazing run. There were other riders there who performed some amazing, ground-breaking runs and were part of forging ahead with the sport of snowboarding. We will get to see the entire event on NBC on March 31st. And trust me, you will want to tune in because it was shot and produced by Brain Farm, the same people that brought the world The Art of Flight.

In all, Red Bull's Supernatural sounded like an incredible event. I hope that it continues every season and continues to explore the boundaries of what is possible on the snow. I just hope that they open this event up to skiers next year!