The concept of cat skiing began over 30 years ago at Selkirk Wilderness, which is located near Meadow Creek, British Columbia, Canada.  Brenda and Alan Drury had an epiphany while on a ski holiday and realized that the ski hill grooming machines would make an excellent logistical tool for accessing the backcountry – provided there is a network of snow roads which can be used all winter long.  Since then the sport has grown and expanded year after year.  In the last 10 years this growth has accelerated, with the capacity increasing three-fold.

With improvements in technology, cat-skiing now rivals heli-skiing in terms of both the quality and quantity of skiing it provides. The Piston Bully 300 snowcats, which are becoming standard in the industry, are much better climber's than the old Bombardier's. This means that you are able to get up steeper grades and access much more terrain. The PB 300's also climb much faster, resulting in more skiing. Even the rides have become much more enjoyable as the cats drive much more smoothly and quietly providing an excellent breather between runs. 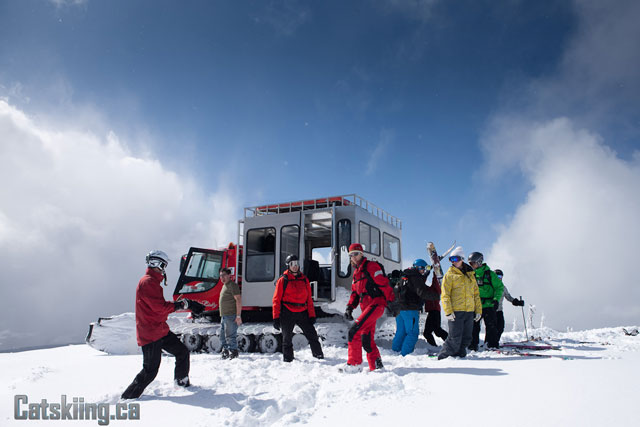 Cat skiing now comes in two forms: day skiing operations – usually located near a town; and remote, multi-day operations based out of a wilderness lodge.  A cat-skiing / cat-boarding holiday begins with a safety talk and avalanche transceiver practice session with the guides.  On subsequent days the skiing begins immediately following breakfast.  The first drop-off of the day is usually near the lodge.  The guides then work their way to the far parts of the ski area through the morning –and back to the lodge through the afternoon.  At some operations (for example; Mustang Powder) you can ski right down to the lodge on the last run of the day.  In order to maximize the amount of skiing each day, progressive cat operations strive to make their snow road systems as efficient as possible.  Rarely does one ski multiple times on the same run – since a ski day with variety is usually the most interesting.

The ski group consists of a lead guide, tailguide, cat driver, and usually 12 ski guests. The remote cat skiing lodges usually run 2 or 3 snowcats – so a total of 24 or 36 guests. Some operations have an extra seat in their snowcats, which is used by lodge staff or practicum students (aspiring guides). The weather dictates the type of ski terrain used each day. On clear days you can expect to be up in the alpine, while on snowy and cloudy days you will generally be in the trees and glades. A typical run of 2000 ft. vertical will take about 20 minutes to ascend in the snowcat – and a similar amount of time to descend on skis. Some cat operations stop to have a picnic lunch on the snow while others have their guests eat lunch during the cat rides.

The passenger cabs on the snowcats are heated, comfortable and fairly quiet.  Cat skiers often comment that they really enjoy the social aspect of the snowcat rides.  At the top of the ascent everyone disembarks and helps unload the ski gear – so that the cat can leave promptly and be down at the bottom of the run when the skiers arrive.  Most operations have a spare snowcat, so in the event of a mechanical breakdown the ski program can continue.