Getting attention for his unique shooting style in the backcountry. 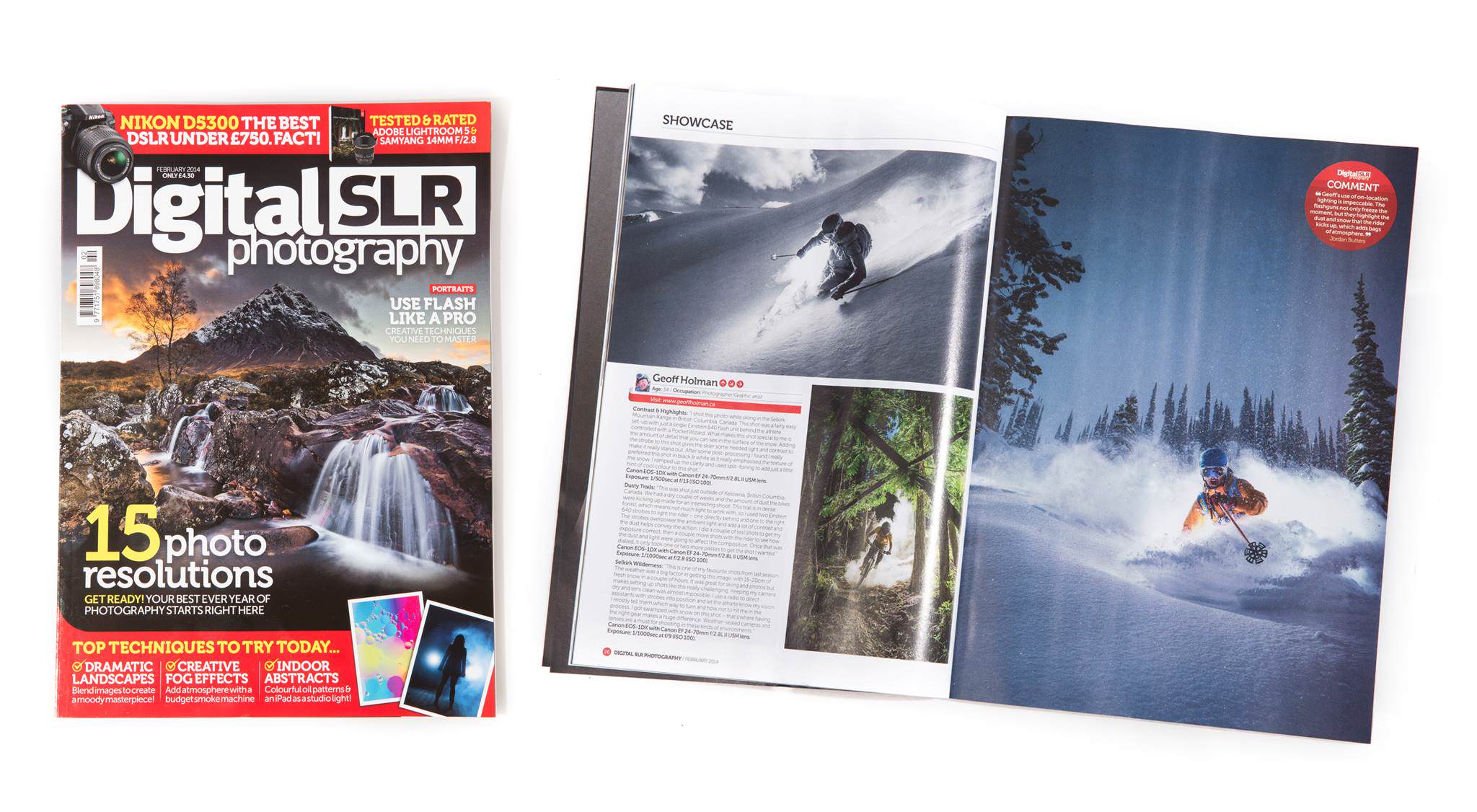 Our resident photographer Geoff Holman has been featured in the February issue of Digital SLR Magazine. Two shots from Selkirk Wilderness Skiing and a deep forest shot of mountain biking in BC's Interior. Geoff has been working over the past few season to develop a unique style and adapt his equipment for mobile use in the backcountry.

Full Page - Geoff set this shot up at the end of a stormy day at Selkirk Wilderness Skiing. It was a dark day that usually makes ski photography a difficult task. With Geoff's lighting techniques he can light up the scene and get dramatic shot like this.

Half Page Ski - Again at Selkirk Wilderness Skiing but this time on a brighter day. Still using Geoff's lighting set up we get a shot that shows off the terrain but really highlights the action of the skier. It even enhances the texture of the snow.

1/4 Page Bike - It was a dry and dusty day in the BC Interior when we headed out to test some shots. We were looking for set up that could show the think foliage but still give Geoff the kicked up dust effect that ended up in this shot.

Geoff loves finding new set-ups and developing new techniques. Action photography is a great medium and the whole team at Catskiing.ca love pitching in and helping him realize his creations.

If you want to get yourself some amazing powder skiing like in the pictures above, check out Selkirk Wilderness Skiing. It will change your life.

Congrats Geoff on getting 'exposure' in another magazine!

A Toy for the Catskiing Obsessed

You are never too old for a cool remote control!

If you are obsessed with catskiing like we are then this is the toy for you. The Kyosho Blizzard RC Plow Vehicle is a detailed remote control with all the working parts including the plow!

Sending it at Island Lake Catskiing

At Island Lake Catskiing they are generally addicted to powder skiing and snow boarding and most of the images and webisodes out of there reflect that.  In early January 2014, Island Lake invited a few local shredders to get a bit more creative with their catski terrain features and show off a bit, becouse sometimes you just need a little airtime.

Here is a little webisode from those days.  Athletes include: Mikey Witlox, Luke Nelson, Ben Ogilvie and Mark Butcher.

Stop what you are doing and get out to the powder! 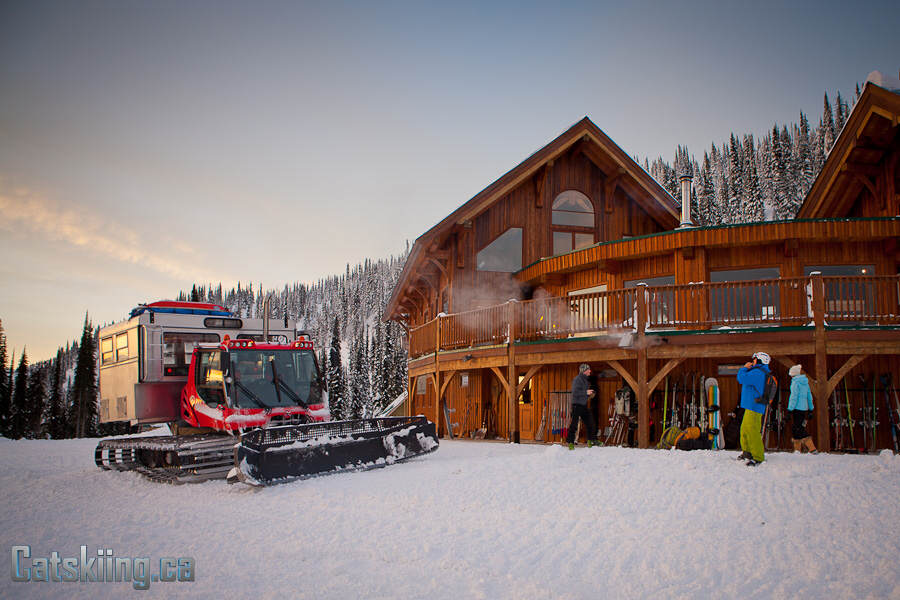 Mustang Powder has recently had some cancellations and are offering a few trips at discounted rates:

If you would like to book our last minute seat e-mail This email address is being protected from spambots. You need JavaScript enabled to view it.

January has been amazing at Island Lake Catskiing

Island Lake Catskiing is off to the races this season.  The Fernie area experienced above average snowfall early season and at one point was reporting more snow then most other areas in North America.  At Island Lake they have had about 5 metres of snowfall as of mid-January and there is a compressed base of 265 cms at tree line.  Although they are mostly booked up for the season, there is a bit of room at the end of March.  Have a look at their new website at www.islandlakecatskiing.com

Check out these recent photos from Mike McPhee.

Brenda Drury hands over the reigns of a legendary operation.

In 1975 Brenda and Allan Drury set out on a exploration to find the perfect spot to start their dream. The dream of snow cat assisted backcountry skiing. 39 years later they are hailed as the pioneers of catskiing as we know it today. We have had the pleasure of skiing at SWS on a few occasions and really feel like part of their extended family and the story of catskiing. One one trip we were able to sit down to dinner with Brenda and got to hear the story from the beginning until present day. It was a real treat to be able to understand her and Allan's passion for powder and also for coming up with a vision and following through on it. Below is a video that was done a couple of years ago that sums it up nicely:

SWS has new owners now and they are just as family oriented as the Drury's. Megan and Paul Osak from Nelson BC and Janie and Scott Munro from Aspen CO are now the new visionaries of SWS. Their plans for the near future are to keep things pretty much the same as before. Hey, if it ain't broke right. A few changes that they are planning are an extended ski week with a few more spots available and some possible renovations to the lodge.

We are excited to see the transition of SWS to the new owners and are grateful to have skied the legend while under the vision of the founders. Here is the official news release from SWS:

Selkirk Wilderness Skiing, the original cat skiing operation in the world has been sold by founder Brenda Drury after 39 years in operation. Snowcat skiing was pioneered in 1975 by Allan and Brenda Drury in the small community of Meadow Creek, BC. Situated in the south east corner of British Columbia, 90 mins north of Nelson. Over the past 39 years, the Drurys and their staff at Selkirk Wilderness Skiing have developed a loyal following amongst deep powder skiers and snowboarders looking for an alternative to both lift-serviced and helicopter skiing and riding.

Selkirk Wilderness Skiing has been purchased by 2 families: Megan and Paul Osak of Nelson, BC.  and Janie and Scott Munro of Aspen CO. The deal has been in the works for the better part of the past six months.  There will be no big changes in the short term and it is business as usual for SWS this winter, which is reporting an almost fully booked ski season starting in mid-December and running until early April 2014. There are plans in the works for a lodge renovation in the future as well continued improvements to the guest experience.

Dashing through the snow at White Grizzly Catskiing

Christmas came early this season with plenty of powder! 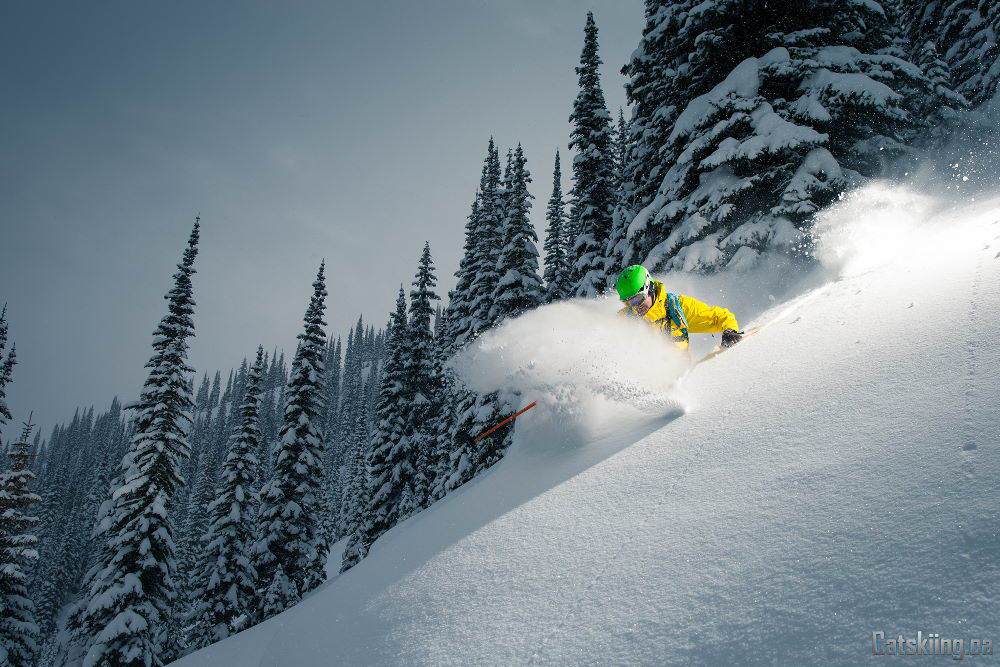 We have officially started catskiing season here in BC and we did it up right. This year we kicked off the powder season at White Grizzly Cat Skiing in Meadow Creek BC. Some areas of the province have been blessed with early season snow while others are still doing the snow dance. White Grizzly is one of the places that has been consistently hammered early on.

Our trip started on December 18th with skiing on the 19th and 20th. Down low in the valley there wasn't much snow to speak of so we had to rely on the reports from skiers that were out the day before. It is sometimes hard to tell if they say it was awesome to make themselves feel better of if it truly was awesome. The looks on these peoples' faces were hard to fake. It looked like we were in for a treat.

After a night in the cozy White Grizzly lodge and some excellent food in our bellies we were off to discover what they White Grizzly terrain had to offer. We found steep tree runs, drops and features everywhere and an abundance of early season powder. The next two days were a blur of pow, trees, steeps, rocks, laughs, beers, hot tubs, food, stories and good times. Thank you to Brad, Carole and all of the staff at White Grizzly for making us feel at home and showing us the goods on the mountain.

Here are a few shots of the trip so far. We are still editing and going through the footage. Enjoy and stay tuned for a full review of White Grizzly Cat Skiing.

Big Red Cats is getting ready to go

Rossland and Big Red Cats in the snow zone

A town that is a must see on a ski tour of the Kootenays is Rossland, BC. Rossland is a turn of the century mining town, and is a great draw to skiers and tourists all year round. Rossland and Nelson, winners of the 2012 POWDER Magazine ski town throw down, are a hub for numerous catskiing, heli skiing, and ski resort operations.

One of these that is benefiting from the early cold temperatures and storm systems is Big Red Cats. Check out these pictures, taken from some "work" the crew was doing on November 20. I think I need to get in on this job of checking the snowpack.

Big Red Cats will open early if snow conditions allow, so keep an eye here for any updates, or check out their website for availability.

Check out our Catskiing Map for other operations in that area and around the world, and start planning a trip today!

Snow in BC's interior is making for a promising early season

There may still be grass showing through where you live, but in BC's snow belt, it's starting to pile up. The area around Revelstoke, British Columbia is well known for it's deep, blower pow, and 2013-14 is shaping up just that way for Mustang Powder. Check out these pictures taken around the lodge over the past couple days. The snowpack is already at 125 cm, and they have started on the arduous task of building the cat roads for the season.

Mustang Powder is a Beautiful destination, with a large timber frame backcountry lodge, and world class catskiing. Nick and the crew are all about skiing, and they will have you out on the Mountain from first light to sundown. Space fills up quick, so take advantage of the spots they have left before they're gone. If you are looking for something a little more challenging and less people, they have a small groups/steep chutes program. 6 people getting to more remote lines in sick terrain, check it out here.

Just one Tenure over and benefiting from the same great snow, is K3 Catskiing. They run day trips out of Sicamous or Revelstoke, and provide a great way to squeeze in a day or two of catskiing if you are going to be in the area.