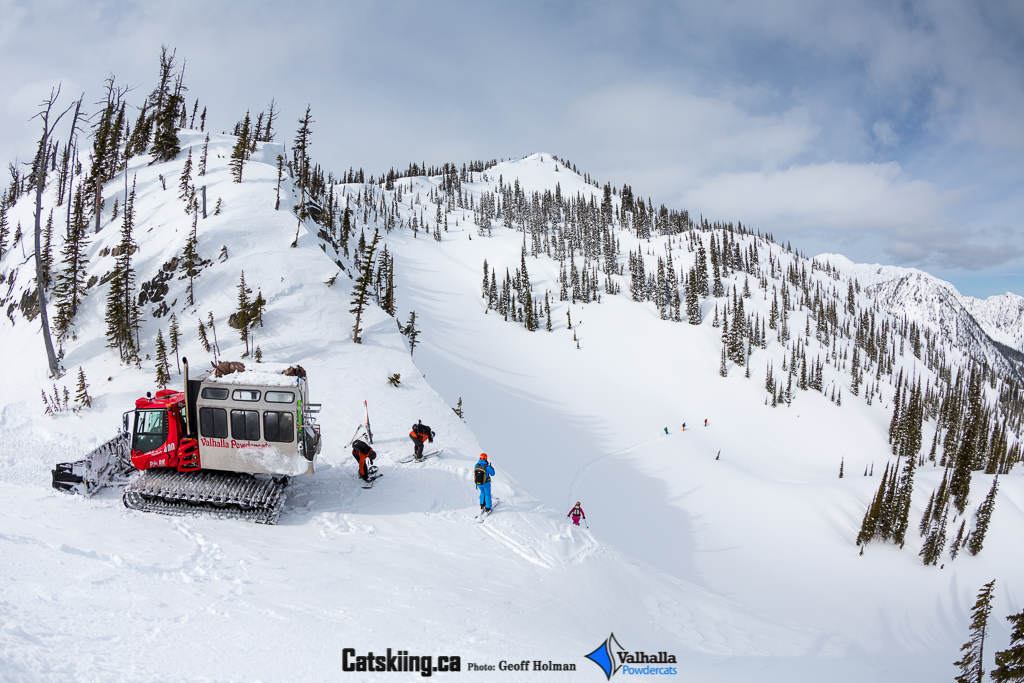 We just finished up our third day of epic skiing at Valhalla Powdercats and we were still finding new terrain. Their new expansion into what is called the Caribou Bowl has give Valhalla a huge amount of ski-able terrain. What is interesting about the Caribou Bowl is that it seems to have something for every type of skier. There are wide open alpine bowls, ridge lines, tree runs and airs and features mixed in for good measure.

What really struck us with the Caribou Bowl is that every time we stepped out of the cat our senses where overloaded from the views. Those mountains are massive and so powerful looking. It is worth the trip just to be in those bowls and soak in the vistas. But we weren't just there for the views! Our lead guide Tyler was joined by Maria Grant (one of the owners of Valhalla) and they took us down some new runs that were nothing short of amazing. We even got to session a pillow line that felt like it was right out of Powder Magazine.

It was an incredible experience for us and one that I am sure we will be talking about for years to come. With the new Caribou terrain added to the already legendary Valhalla terrain, do yourself a favour and book now before 2014 sells out!

Here are a few shots from day 3. We will have an entire gallery coming soon.

New lines in the Caribou Bowl at Valhalla Powdercats 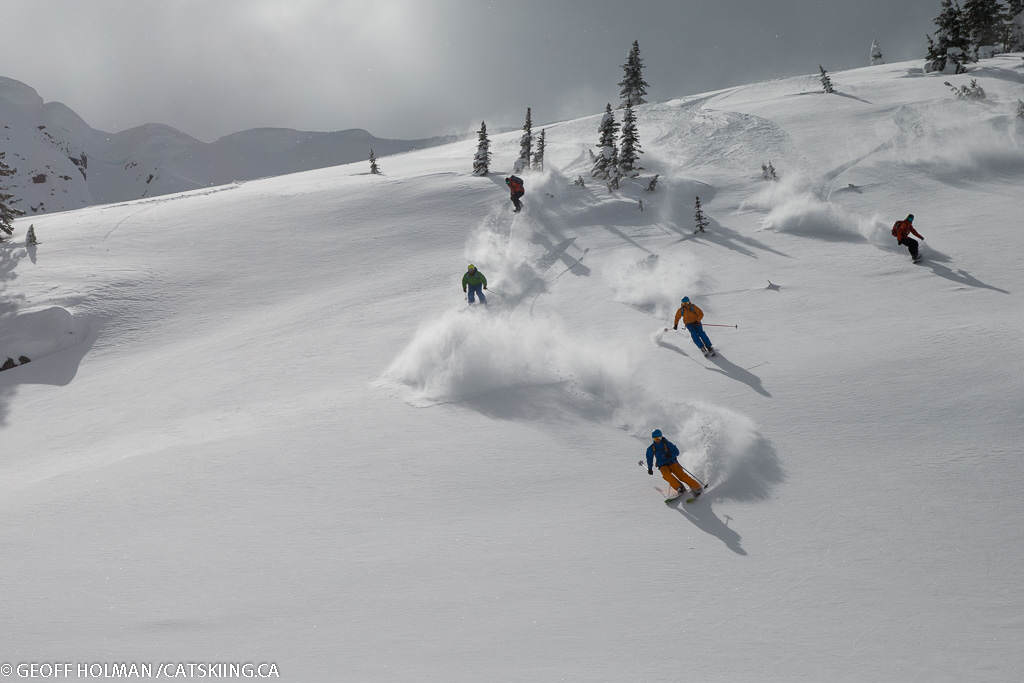 Today we were treated to an adventure of exploring new terrain and skiing new lines, some that have rarely been skied before. Valhalla Powdercats has just recently started to open up a new area of their terrain called the Caribou bowl. It is a vast alpine area with bowls, rocks, and steeps. From what we've seen, it's a place we will definitely want to come back to.

We also had the pleasure of skiing with a pair of Dutch ski journalists, Julie and Caroline of Juulski & Carolinevanthoff Photography. They were drawn to BC by the snow, and from the looks on their faces today, I think they like it here.

Here is a taste of the pictures we collected in our journey today.

Powder, sun chutes and bowls were on the menu today at Valhalla Powdercats 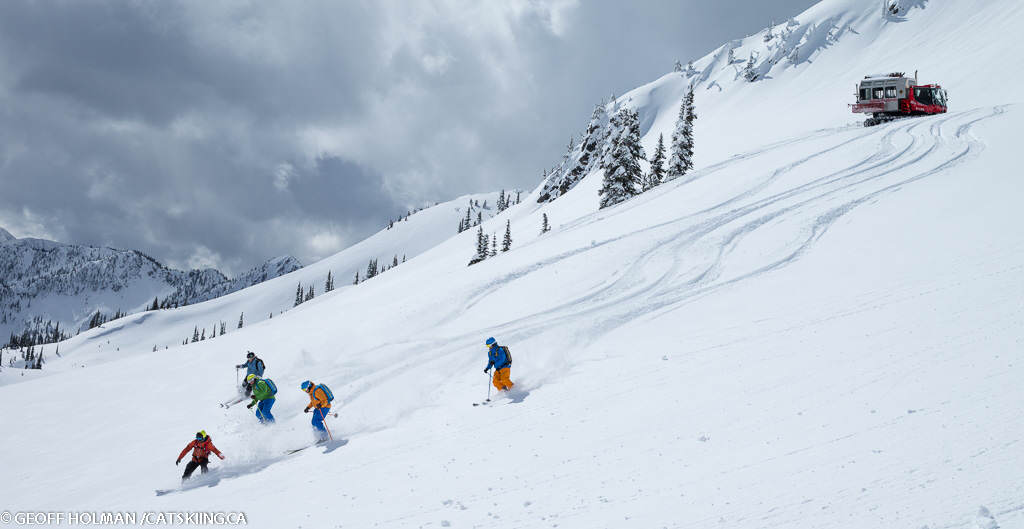 Today was just day one of a three day trip to Valhalla Powdercats and if the turns today were any indication, we are in for something special. the later half of March has been great for skiing in the high alpine. It is brown and warm in the valley but up high the snow has been coming in 20cm and 30cm waves every few days. Valhalla had a complete reset a while back and the temperatures are mid-winter. The snow is light and fluffy and the stability is excellent. Late season skiing is at its best here in the Valhallas.

this trip we are cruising around the Valhalla terrain exploring their newly expanded area the Caribou Bowl. The terrain up there really feels like bigger mountain heli skiing and gives the Valhalla area a whole new feel. Big bowls and rolling hills to narrow steep chutes, there is something up there for any skier ability. Another two days of this and we should have it all figured out!

We took a tonne of pics today that we will be sorting through but for now check out these few gems:

Big Red and Sunny All Over 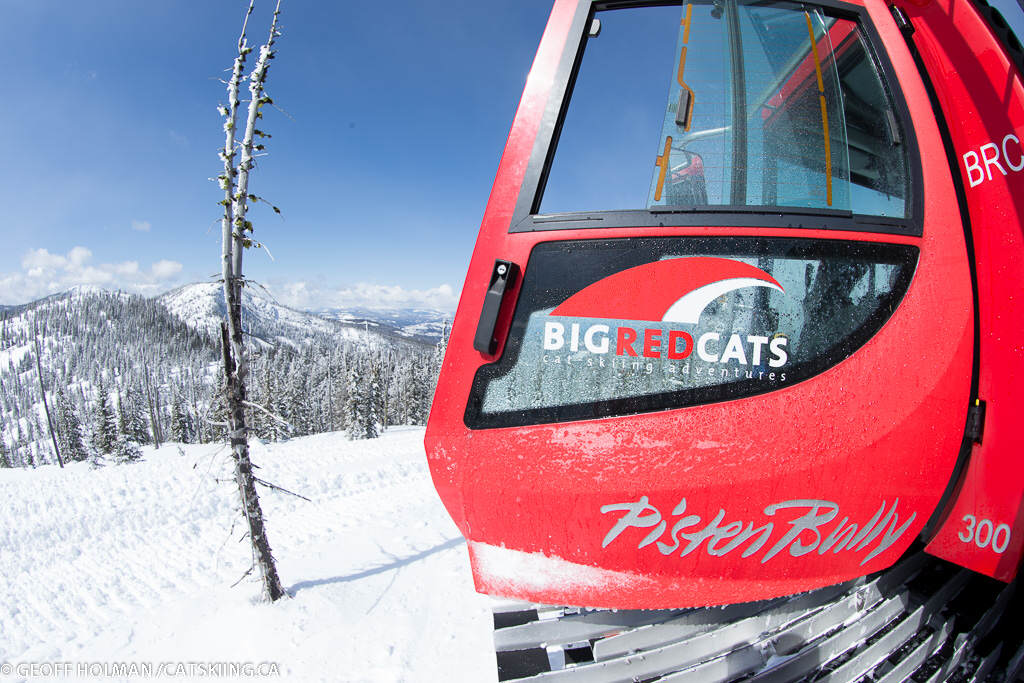 We had a powder filled beautiful sunny day at Big Red Cats. We made the trek out early this morning and met the Big Red crew at the very cold staging area. It's hard to believe but it was -17 and sunny which meant the snow was dry and light. Perfect for shredding under the Kootenay sun.

Our guides Kieren and Pete took us to some new terrain that we hadn't skied yet in all our years at BRC. The last few years Kieren and his summer crew have been opening new terrain giving returning guest something new to experience year after year. We found some great terrain to play around in making for some excellent shots. This is the start of a four day road for us so we will post a full gallery next week but for now we have a few tasters below:

A foot of powder a day keeps the doctor away 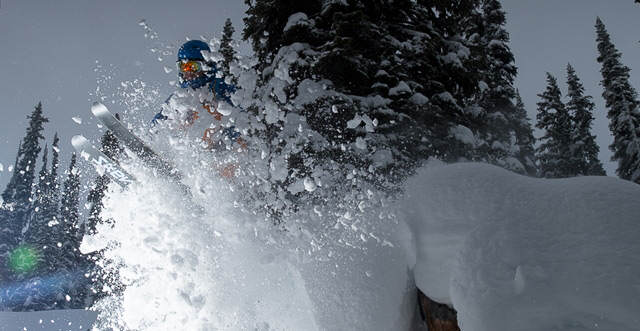 The last day of our three day excursion to Selkirk Wilderness has come and gone. Now that we are down in the valley where it is Spring, the memories of the powder at SWS seems like forever ago. At least on our last day it had snowed 30cms overnight up at the Selkirk weather station!

We were treated to line after line of fresh snow all day long which ended with a perfect blast down Alan's Glades. Jason and Rob took us to all the sweet spots of the day and all that was left when it was over were smiles and stories.

Thanks for the great trip SWS! Stay tuned for a full story and gallery of our visit. For now, here are a few pics from Day 3:

For the guys in Group 2 that skied with us, here is a guest photo gallery.

If you think it doesn't snow in March, you'd be wrong! 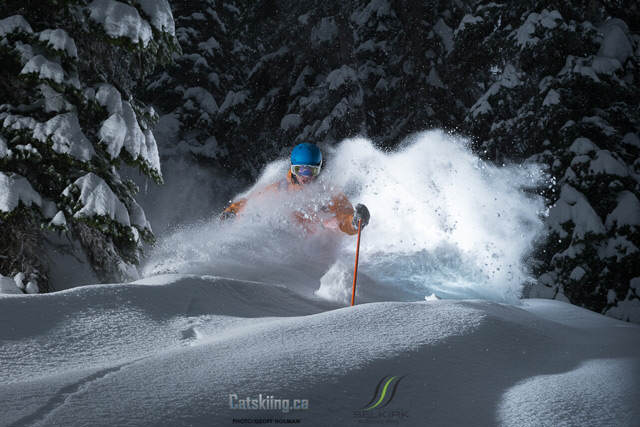 There is something amazing happening in the deep parts of the Kootenay region of BC. At 6am in the morning we woke up as the snow just started to fall. As I write this is 12 hours later and the snow still hasn't let up. In fact, it is snowing even harder.

Our second day here at Selkirk brought us run after run of perfect Kootenay smoke and we ate up as much as we possibly could. We did a three-run session in Midnight Bowl that was just this side of epic and then Kevin and Jenneka (our guides) took us over to SWS's famous Bunga Bunga to polish off the day. Long vertical, big trees and deep powder were on the menu for the day.

Tonight we are being treated to a meal prepared by David Hawksworth of Hawksworth Restaurant in Vancouver BC. We got a few runs late in the day with David and his head chef Christian and those boys know how to rip!

The lodge is buzzing with anticipation for tomorrow and by the looks of the storm dumping down outside it is going to be wild.

By the way, Selkirk Wilderness Skiing still has some spaces left at the end of March. 3 Day and 5 Day Tours. Take it from us, the powder is insane and you will be glad you came! Tell em we sent ya!

Because a day without sunshine is like, you know, night.

We are up at Selkirk Wilderness Skiing for a few days this week and if day one is any indication, we are in for a treat. We arrived Sunday evening to a brown and Spring-like valley bottom. We were assured that just a few hundred metres higher that the landscape was very much winter. After a short cat ride we realized they were right.

Day 1 - Monday morning we woke up to fresh blue skies with a dusting of 6cms on top of another 20cm up high. Did I mention it was sunny? After another fantastic breakfast prepared by Melissa and her kitchen staff and we were off.

The day brought turn after turn of fresh powder with an epic sun drenched Selkirk backdrop. The one thing we just can't get over here is skiing incredible terrain with unparallelled views every run we skied.

Now we are getting ready for another freshly cooked and locally source meal from the SWS kitchen. Tonight we will make new friends up here at the lodge and all try to figure out how much snow is going to drop over the next couple of days...

Here are just a few images from the day:

The event, held at Baldface Lodge in Nelson BC, has now concluded and the new champ is Gigi Ruff! This is an inspired event from the mind of Travis Rice and we are sure it will be back bigger and badder than ever for 2014.

Check out this super cool event poster from the event. Get your limited edition by following the link. 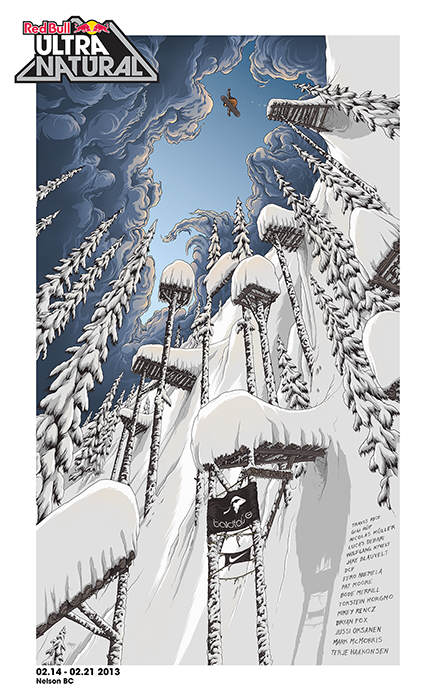 We got out on some of next year's gear and there are some good ones!

Last week we were invited by our friends at Freshair.ca to come out and test some of the 2014 powder skis at Big White Ski Resort. So like good little powder freaks we dropped everything and headed up to see what is what for the 2013/2014 ski season.

Unfortunatley there wasn't much powder to be found that day but the skis were tried more than made up for the lack of fresh pow. We tried more than 30 pairs of 2014 skis from several different companies and there were a few that stood out in the crowd....

The K2 Annex is a refreshed version of the current SideStash. What the 'stash was missing was a longer tip rocker and a flipped up tail. Both of these features have been perfected in the new K2 Annex series. The tip is a longer and lower rise giving the ski a more comfortable and controled feeling while touring. Don't be led astray though, the Annex has ample edge grip with skiing in the crud or hard stuff. The new tail design allows the ski to break free a little more easily too.

These skis are a total reversal of everything we have experience from the Head freeride offerings in years past. The are lighter, more nimble and transfer from edge to edge with ease. In years past, the Head powder skis felt light wider GS skis. This is good for some but it really narrows the market for the skis. For 2014 the Head Flight series blew us away. We can't wait to get out and test them in the powder.

The Volkl Katana has always been a solid ski since it first debuted. We always liked it and recommended it for all-round aggressive skiers. For 2014 the Volkl Katana VWerks is insane! It comes in a full carbon design that is ultra thin, ultra light and ultra fast! It isn't going to be cheap and it isn't for everyone, but it you like to ski pedal to the medal all the time and especially enjoy crud-busting then these skis are for you. Your cheeks will ache from smiling so much!

Unchanged from 2013 the Salomon Rocker2 122 still is a stunner. It is confident, light and can handle anything you throw at it. We have liked this ski since it was introduced and still do. We were looking forward to an evolution to the Rocker but I guess we will have to wait until next season.

We are going to post reviews of all of the 2014 powder skis we tried at the intro but for now we have some skiing to do!

Click Contine Reading to Check out all of the pics