The Characters of Island Lake Catskiing

Like many mountain settings, Island Lake Catskiing has always attracted interesting characters to both work and play there. Meet a few of their interesting staff in this new webisode.

For info on Island Lake Catskiing and to book your next trip, visit: www.islandlakecatskiing.com

Into the Mind - Official Teaser

Sherpas Cinema is at is again and this one look stunning

From the makers of All.I.Can comes the new feature film: INTO THE MIND

Blur the lines between dream state and reality, as you perceive the world through the minds of many. Into the Mind contemplates the experiences passed between mentors and peers to paint a philosophical portrait of human kind. What drives us to overcome challenge? How do we justify risk? What forces are at the core of a mountain addiction? Unique athlete segments over a multitude of mountain sport genres depict the connectivity of Earth, and window into never seen before moments. Explore how we begin our perception of self, construct the foundations of confidence, and are ultimately led up the path of self-actualization.

As Buddha once said, “The mind is everything. What you think you become.”
Into The Mind is about becoming.

The early season snow has piled up enough to get some runs open for some hungry powder seekers. 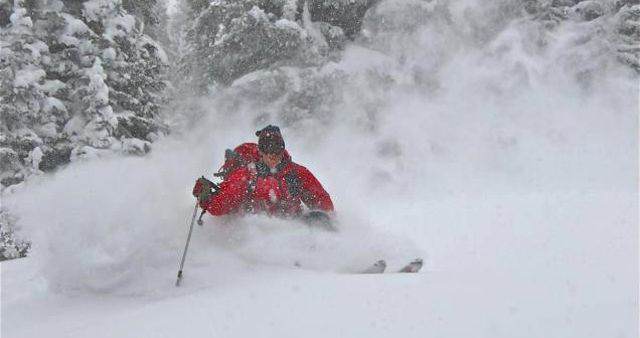 It is official: Big Red Cats in Rossland BC will fire up the Cats for the first runs of the 2012/2013 catskiing season! Kieren Gaul of BRC was up in the terrain today and is stoked to announce that they will be running the snowcats this weekend. After a long summer of anticipation, they sold out their first cat on Saturday November 24th but have seats open on Sunday.

The early season deal is $2399 for the entire cat. Conditions are still early season and only limited terrain is open, but they pushed a road into the top yesterday so they are ready to rip!

Tell them we sent ya!

SWS Lead Guide Jason Remple is out 'testing' their terrain

It's not enough that Jason gets these early season turns in, but he has to send us these videos! 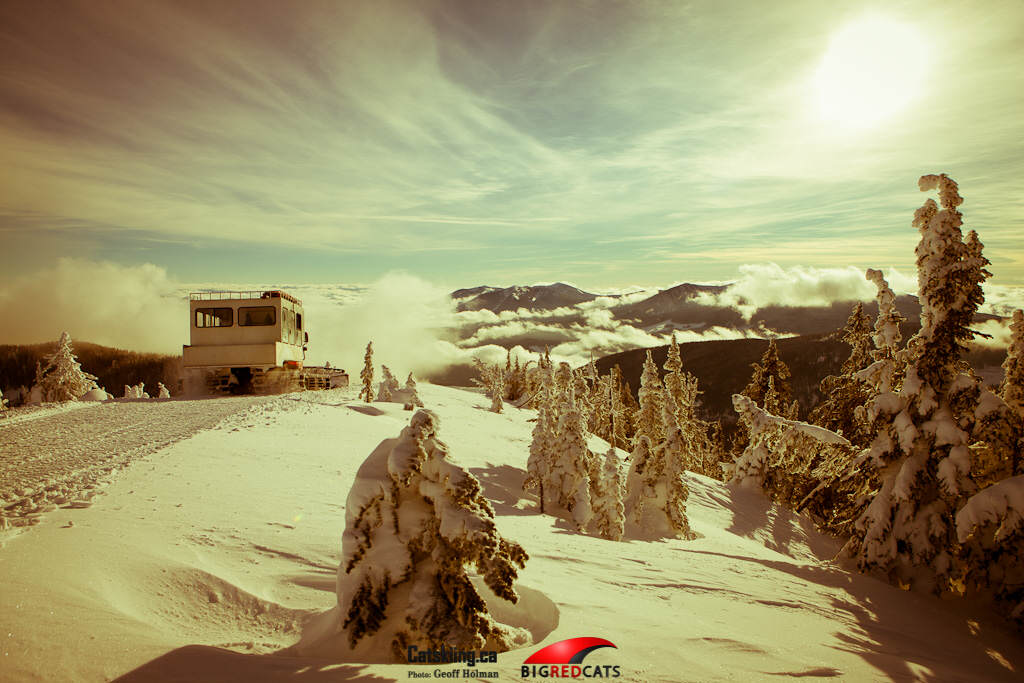 The kind folks at Big Red Cats have released an early Christmas present today. They are offering a 3-Day, 3-Night special for only $999 total. That is cheaper that their standby rates! The available dates are between January 3rd and 17th 2013 and are subject to availability of course but man, what a deal.

We do a lot of catskiing in early January and have had good luck for the past 10 years and this year is shaping up to be no different. We suggest giving Paula a call at the BRC head office and arranging a post Christmas trip. Hey, you might as well spend the money now before it is all gone after Christmas!!

Click here to get all the details on this special: Big Red Cats 3-Day Special 2013 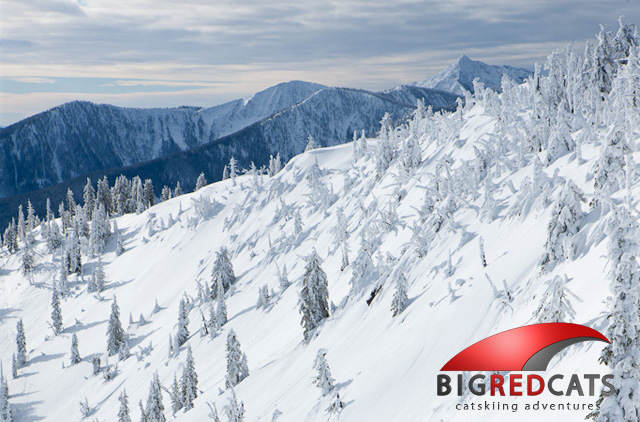 Whether you are getting ready for your first winter of backcountry skiing and riding or you’ve been at it for years, the Avalanche Skills Training (AST) Level 1 or 2 course - developed by the Canadian Avalanche Centre - is the perfect opportunity to learn about (or brush up on) safe backcountry travel techniques, route finding, slope assessment and  companion rescue. Join us for a combination of classroom learning and snowcat assisted ski touring. Our AST courses are taught by Keith Robine, a professional member of the Canadian Avalanche Association  with 20 years of experience teaching avalanche courses to recreational skiers and riders.

These early season releases from Salomon Freeski TV are killing me! This one in particular. Episode 3 is full of nothing but deep, DEEP powder. Skiers grinning from ear to scruffy ear. Powder pillows. Face shots. Big hits. It is all too much...

The only thing I can do is watch it over and over again throughout the day. Most likely I will end up grabbing a coffee and heading down to my local ski shop to chat with some like-minded individuals who share the same pre-season pain I do. It is like a support group of sorts.

Also, since this is a site about Catskiing we should note that there looks to be some terrain from Monashee Powder Cats and Backcountry Snowcats in there. Oh yeah, BC is awesome!

If you are looking to get into a pair of Salomon Rocker 2's this season, check out our friends over at www.freshair.ca. It is a great shop. Tell them we sent ya!

The New Gear is Here from Outdoor Research!

OR steps up their Sidecountry line once again for 2013 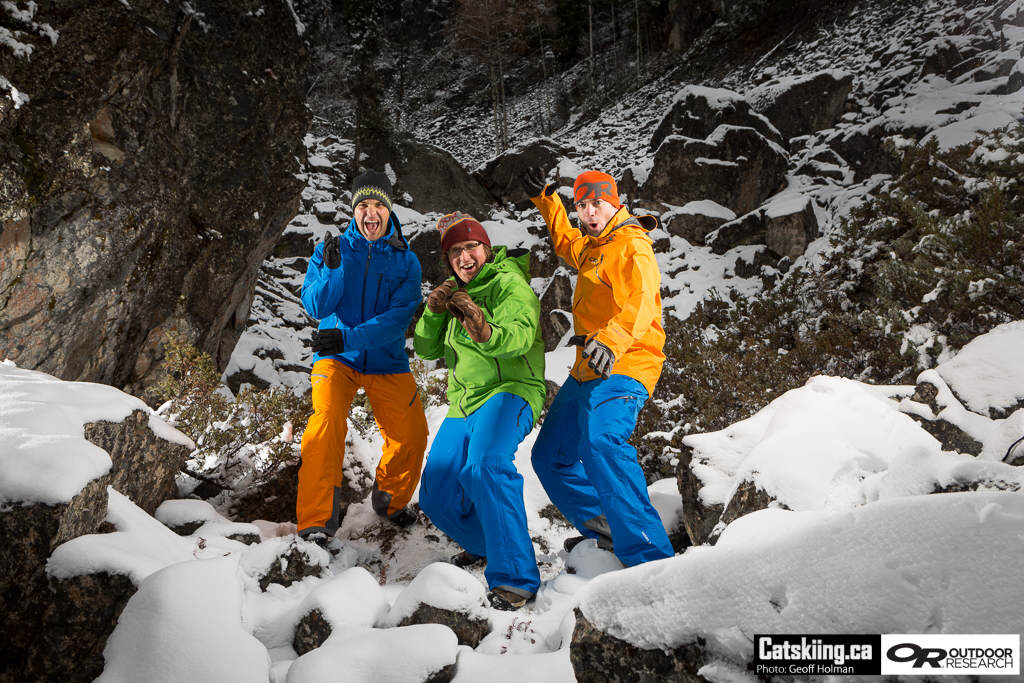 Christmas came early this season for everyone here at Catskiing Canada headquarters! The delivery man dropped of a few boxes of joy from Outdoor Research filled with the latest and greatest gear for 2012/13. The new Sidecountry line-up from Outdoor Research looks stunning and wears even better. This will be our third season running the OR outerwear at Catskiing operations around BC and we are stoked to show it off.

New additions we are particularly excited about are:

We will be posting reviews of the OR Sidecountry gear during the first few weeks of the season once we get some time on the snow. But we can tell you that as the word spreads, there won't be much left on the shelves at your favorite mountain shop!

Here are a few teaser shots below: 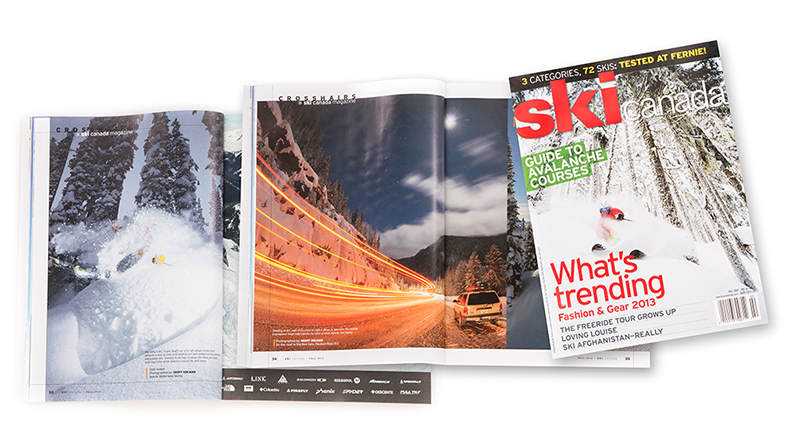 Check it out! We made it into this month's Ski Canada Magazine Crosshairs Gallery. Guest photo editor John Schwirtlich liked what we had and featured not one but TWO images from our collection.

Last season, our photographer Geoff Holman took his photography to new heights and it shows. John really liked Geoff's ability to use remote flashes to light up the darker days skiing in the trees. This first photo is taken on Lightning Ridge at Selkirk Wilderness Skiing near Meadow Creek BC. Shooting in the trees can be tricky to shoot and on this particular day it was snowing so hard that natural light was hard to come by. So Geoff brought out his very portable strobe rig that he built himself to give us way more opportunities for shooting in the forest. This shot of me (Todd Avison) is what resulted. 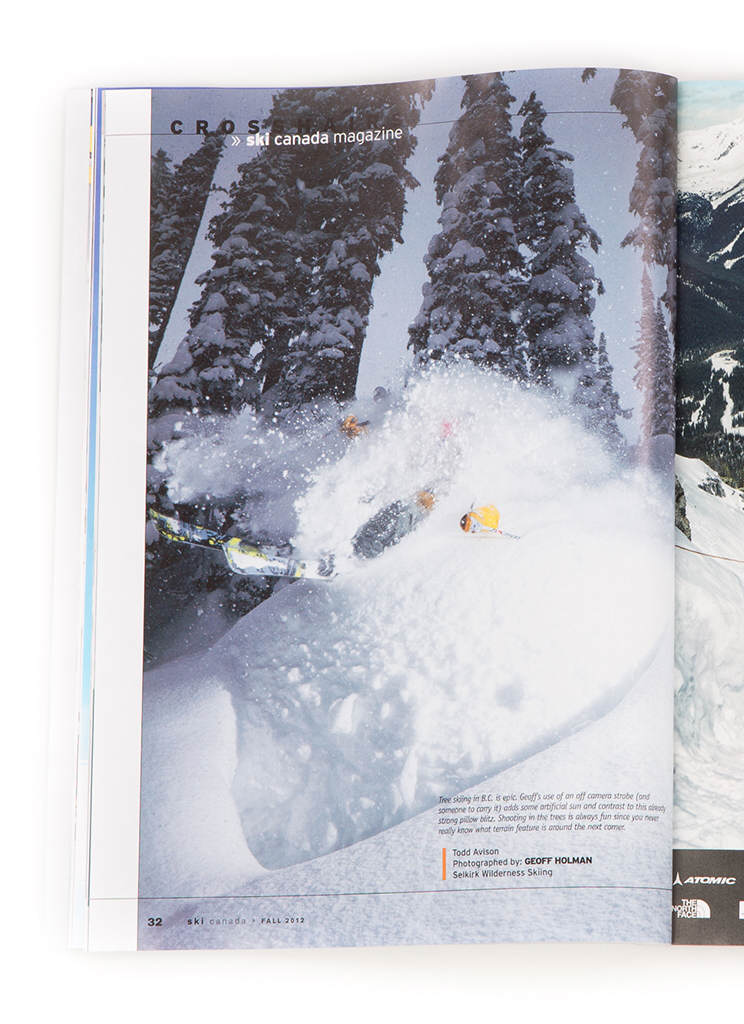 The second shot featured is during a trip to Big Red Catskiing in Rossland BC. We left for Rossland later in the evening and this particular photo was taken around 10pm on the Paulson Pass. It was just us, the moon and truckers on the road. The black ice was pretty bad so we took our time when all of the sudden we got above the clouds and saw this awesome shooting opportunity. 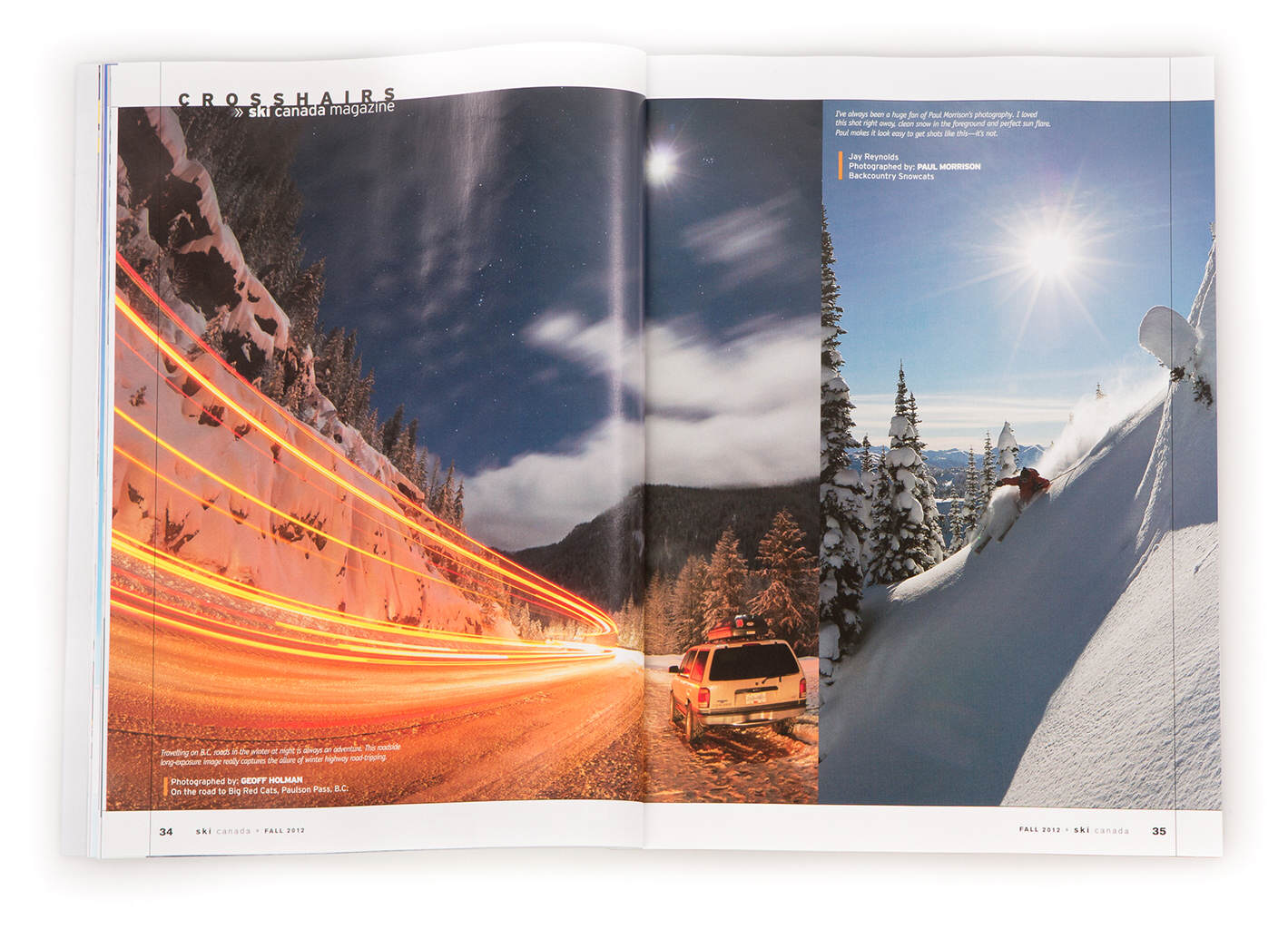 Thanks to John and Ski Canada for publishing our pics! We are stoked to shot more and see what we come up this year.